Jeremy
Grande Prairie, Alberta, Canada
i'm the Director of Camp Wapiti and i have the best job in the universe. yes, the whole universe.

kurt warner can play, but can he write? 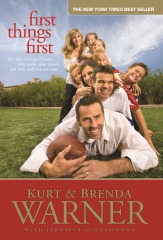 so i was given the chance to read this book for free from Tyndale, in exchange for an honest review of the book.  and to be honest with you, if not for receiving this book for free, i probably wouldn’t have bought it.  i don’t normally read parenting books, and i picked this one up mainly because the choices were very limited at the time.

but “First Things First: The Rules to Being a Warner” did surprise me a few times as i made my way through it.  as a parent of 3 small kids, it was refreshing to hear that i’m not the only one who walks around my house wondering where the poop smell is coming from.  it was also good to hear the encouragements that you generally hear as a parent, but normally just sort of take as common sense.  i found myself thinking at times about how i could use an idea that had never occurred to me before, and at others thinking about how i’d already tried it and found it didn’t work.

i guess you could say that i was pretty sceptical about this book; i at first wondered what a very high paid football player could teach me about my family.  but the honesty and humility that both Kurt and Brenda (ya, we’re on a first name basis now) write with definitely saved the book for me.  4 out of 5 stars.

ramblings from Jeremy at 8:48 AM